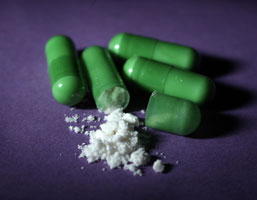 Addiction to new psychotropic drugs on the rise

Mephedrone, a chemical drug, it is the latest fashion among city’s young drug addicts and is also commonly known as ‘meow meow’. It is the new fad to have hit the cities.

Mephedrone looks similar to cocaine and is usually snorted or taken orally.

Of late, newer versions of drugs are the replacement for the age-old drugs like heroin. The drug dealers mix new components, which are not banned to save themselves from law.

“The new psychotropic drugs are the worst things to have hit the youngsters. These are drugs, which are not in the banned list of Narcotics, Drugs and Psychotropic Substance (NCB) Act, 1958.

“The last drug which was listed under NDPS Act was Ketamine, and that was around three years back,” said Mukesh Khatri, superintendent, Central Bureau of Narcotics, Indore.

Officials feel that steps are needed to check the menace owing to the growing number of experiments taking place among drug suppliers and abusers. Chemical drugs are a mix of compounds and one compound is replaced with another.

According to Narcotics Control Bureau, internet pharmacy is an extension of e-commerce in the pharmacy industry, where pharmaceutical products i.e. medicines, are sold online instead of conventional pharmacies.

On December 23, a Public Interest Litigation was filed in the Bombay High Court by Dr. Merchant, it said that ‘Mephadrone, a precursor to methamphetamine, should be listed under the NDPS Act.’ The respondents in the PIL are the Union of India, the director of Narcotics Control Bureau (NCB) and the state of Maharashtra.