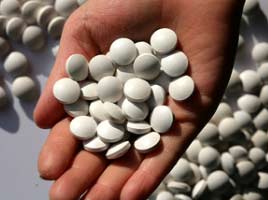 Have you ever thought that India could have health ATMs? Yes, you heard it right. Health ATMs, with a stock of drugs and other medical essentials, can soon become a reality in rural parts of India with some state governments mulling setting up such kiosks through the public-private partnership mode.

The Wish India Foundation, an NGO working in innovations in health, will soon begin a project in Rajasthan through which it will set up health ATMs in the countryside in partnership with the state government. ‘While the Rajasthan project would begin from January, talks to begin such initiatives in Odisha and Madhya Pradesh are at an advanced stage,’ said Wish Foundation CEO Soumitra Ghosh.

‘We feel that primary health care is the main link in the country. We have a data base of innovators in the health care sector and try to implement their ideas after thorough laboratory checking,’ he said. Ghosh said the initiative first involved talking to the governments and identifying their needs and then showing them innovations according to the demands. Health ATMs, automatic kiosk-type diagnostic centres and urine analysers, are among the several new health care innovations whose introduction was discussed at a special meet held earlier in the day.

Over 200 thought leaders from the government and private sector discussed the potential for bringing innovations in health care. Sponsored by the Wish India Foundation, the initiative – with active support from Deloitte Touche Tohmatsu India – is aimed at helping the poor derive benefits from specially designed low-cost glucometers, urine analysers, tele-connected Health ATMs and other devices. The foundation has also committed to raise Rs.600 crore for healthcare innovations, ecosystem and knowledge hub to support the underprivileged sections in India.

‘This shall help almost 100 innovators which they have identified through a study in joint collaboration with Deloitte in the healthcare sector in the next decade,’ said Sunil Wadhwani, co-founder and co-chairman of IGATE Corporation. ‘The fund will be raised by us and core partners such as large foundations initially and then others would add to it,’ Wadhwani said.