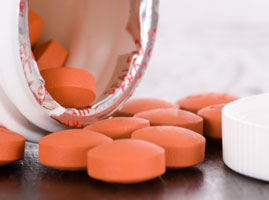 Ibuprofen use could extend lifespan

An over-the-counter pain-relieving and fever-reducing drug could lead to a longer and healthier life for many species and possibly humans, too, according to a new study at Texas A&M University (TAMU) in the US.

“We first used baker’s yeast, which is an established aging model, and noticed that the yeast treated with ibuprofen lived longer,” says lead author Dr. Michael Polymenis, a biochemist at TAMU’s AgriLife Research station, “Then we tried the same process with worms and flies and saw the same extended lifespan. Plus, these organisms not only lived longer, but also appeared healthy.”

The yeast, worms and flies were treated with ibuprofen at doses proportionally comparable to the recommended dose for humans and increased their lifespan by 15 percent.

If human lifespans increased by that amount, it would add an extra dozen years of healthy living, according to Dr. Polymenis, who says his experiments on worms indicate good health would be part of the package.

Measurements of worms’ thrashing and the pumping movements they made while swallowing under treatment indicated they were thriving in their extra years and not suffering.

Over the course of the three-year study, Dr. Polymenis observed that ibuprofen hinders the ability of yeast cells to pick up an essential amino acid found in every cell of every organism called tryptophan.

Less tryptophan being dissolved into yeast appears to make a difference, but Dr. Polymenis said he isn’t sure why yet.

Drugs other than ibuprofen are working too, according to Dr. Brian Kennedy, the president and CEO of the Buck Institute for Research on Aging in Novato, California, who collaborated with Dr. Polymenis.

“Our institute is interested in finding out why people get sick when they get old,” says Dr. Kennedy. “We think that by understanding those processes, we can intervene and find ways to extend human health span, keeping people healthier longer and slowing down aging. That’s our ultimate goal.”

The study was published in the journal Public Library of Science, Genetics.