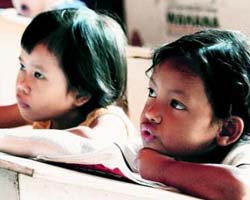 Despite Indonesia’s achievement of becoming the world’s 10th-largest economy, the country is struggling to provide adequate childhood nutrition, with the number of children suffering from stunted growth remaining high nationwide.

According to UNICEF data in 2013, Indonesia stood in fifth place among countries with the highest numbers of stunted children around the world.

The number of stunted children reached 7.6 million in 2013 globally.

The figure was alarming as it showed that some children in Indonesia suffered chronic malnutrition for long periods of time.

“North Sumatra has one of the highest […] average rates of stunted children in Indonesia,” he said, citing data compiled by the WHO in 2010.

Meanwhile, he said that Yogyakarta was the province with the lowest prevalence of children suffering stunted growth.

“It shows that there are some problems with our lifestyle and parenting styles,” she said.

Iing agreed with Farah, saying that most people in Indonesia prioritized the elderly when it came to food and nutrition, often allowing senior groups to eat the best meals.

“Cultural values are one of the things that disrupt the nutrition absorption of pregnant women and children, especially in poor families,” Iing said.